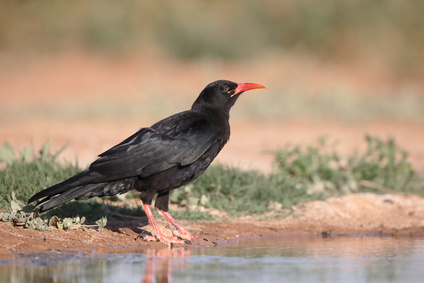 Once a common bird in the England Henry XIII decreed that it’s liking for valuable grain demanded a cull, so dutifully farmers completely decimated flocks almost to extinction. Despite recovering from the royal decree, changes in farming and removal of habitat also took its toll until about 150 years ago there were no more birds in England.

Today you will only find the relative of the crow family in parts of Wales, SW Scotland and Ireland.

Recently a breeding program near at the Wildwood Trust near Canterbury has managed to increase captive numbers with plans to released into the wild, see more

Please contact more@oasthouse.media for more information about the sale of this premium web name available for sale now. Choughs.co.uk

Full provenance available, only one previous use (up to 2016)

This web name was purchased in 2000 and has been solely used by a sports club up until 2016.

The present owner Oast House Media Limited is a web design company with full accounts records for this web name.

We use cookies to ensure that we give you the best experience on our website. If you continue to use this site we will assume that you are happy with it.Ok